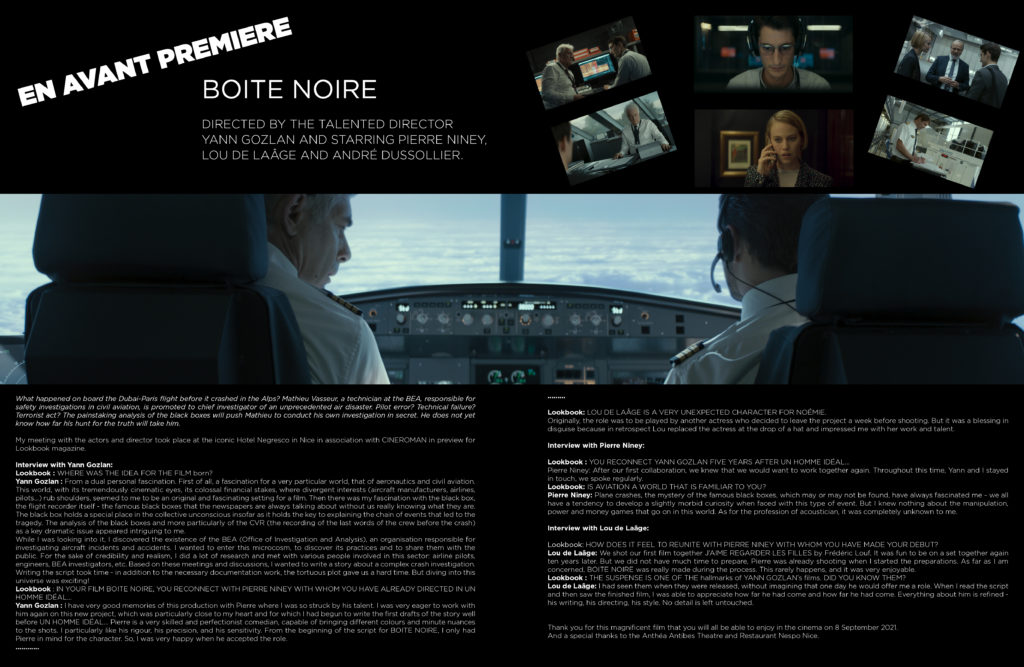 What happened on board the Dubai-Paris flight before it crashed in the Alps? Mathieu Vasseur, a technician at the BEA, responsible for safety investigations in civil aviation, is promoted to chief investigator of an unprecedented air disaster. Pilot error? Technical failure? Terrorist act? The painstaking analysis of the black boxes will push Mathieu to conduct his own investigation in secret. He does not yet know how far his hunt for the truth will take him.

My meeting with the actors and director took place at the iconic Hotel Negresco in Nice in association with CINEROMAN in preview for Lookbook magazine.

Interview with Yann Gozlan:
Lookbook : WHERE WAS THE IDEA FOR THE FILM born?
Yann Gozlan : From a dual personal fascination. First of all, a fascination for a very particular world, that of aeronautics and civil aviation. This world, with its tremendously cinematic eyes, its colossal financial stakes, where divergent interests (aircraft manufacturers, airlines, pilots…) rub shoulders, seemed to me to be an original and fascinating setting for a film. Then there was my fascination with the black box, the flight recorder itself – the famous black boxes that the newspapers are always talking about without us really knowing what they are.
The black box holds a special place in the collective unconscious insofar as it holds the key to explaining the chain of events that led to the tragedy. The analysis of the black boxes and more particularly of the CVR (the recording of the last words of the crew before the crash) as a key dramatic issue appeared intriguing to me.
While I was looking into it, I discovered the existence of the BEA (Office of Investigation and Analysis), an organisation responsible for investigating aircraft incidents and accidents. I wanted to enter this microcosm, to discover its practices and to share them with the public. For the sake of credibility and realism, I did a lot of research and met with various people involved in this sector: airline pilots, engineers, BEA investigators, etc. Based on these meetings and discussions, I wanted to write a story about a complex crash investigation. Writing the script took time – in addition to the necessary documentation work, the tortuous plot gave us a hard time. But diving into this universe was exciting!
Lookbook : IN YOUR FILM BOITE NOIRE, YOU RECONNECT WITH PIERRE NINEY WITH WHOM YOU HAVE ALREADY DIRECTED IN UN HOMME IDÉAL…
Yann Gozlan : I have very good memories of this production with Pierre where I was so struck by his talent. I was very eager to work with him again on this new project, which was particularly close to my heart and for which I had begun to write the first drafts of the story well before UN HOMME IDÉAL… Pierre is a very skilled and perfectionist comedian, capable of bringing different colours and minute nuances to the shots. I particularly like his rigour, his precision, and his sensitivity. From the beginning of the script for BOITE NOIRE, I only had Pierre in mind for the character. So, I was very happy when he accepted the role.
Lookbook: LOU DE LAÂGE IS A VERY UNEXPECTED CHARACTER FOR NOÉMIE.
Originally, the role was to be played by another actress who decided to leave the project a week before shooting. But it was a blessing in disguise because in retrospect Lou replaced the actress at the drop of a hat and impressed me with her work and talent.

Lookbook : YOU RECONNECT YANN GOZLAN FIVE YEARS AFTER UN HOMME IDÉAL…
Pierre Niney: After our first collaboration, we knew that we would want to work together again. Throughout this time, Yann and I stayed in touch, we spoke regularly.
Lookbook: IS AVIATION A WORLD THAT IS FAMILIAR TO YOU?
Pierre Niney: Plane crashes, the mystery of the famous black boxes, which may or may not be found, have always fascinated me – we all have a tendency to develop a slightly morbid curiosity when faced with this type of event. But I knew nothing about the manipulation, power and money games that go on in this world. As for the profession of acoustician, it was completely unknown to me.

Lookbook: HOW DOES IT FEEL TO REUNITE WITH PIERRE NINEY WITH WHOM YOU HAVE MADE YOUR DEBUT?
Lou de Laâge: We shot our first film together J’AIME REGARDER LES FILLES by Frédéric Louf. It was fun to be on a set together again ten years later. But we did not have much time to prepare, Pierre was already shooting when I started the preparations. As far as I am concerned, BOITE NOIRE was really made during the process. This rarely happens, and it was very enjoyable.
Lookbook : THE SUSPENSE IS ONE OF THE hallmarks of YANN GOZLAN’s films. DID YOU KNOW THEM?
Lou de Laâge: I had seen them when they were released, without imagining that one day he would offer me a role. When I read the script and then saw the finished film, I was able to appreciate how far he had come and how far he had come. Everything about him is refined – his writing, his directing, his style. No detail is left untouched.

Thank you for this magnificent film that you will all be able to enjoy in the cinema on 8 September 2021.
And a special thanks to the Anthéa Antibes Theatre and Restaurant Nespo Nice.

BYmyCAR is presenting a new offer